A year back, in a quick span of days we found ourselves amidst peculiar health emergency, a pandemic -Covid-19, which spread its wings at an unprecedented rate across different countries. In an attempt to curb the spread of the infection, lockdown and other government restrictions were imposed in many countries across the globe including India, and the same was lifted by the Government of India in a phased manner after 70 days. Infact, in view of the new strain of corona virus, lockdown was again imposed in the month of April 2021. A pandemic of such a magnitude, and the governmental restrictions imposed in view of the same, had adversely impacted business, commerce and economy, both nationally and globally. Parties bound by contract found themselves in a difficulty/ impossibility to carry out their contractual obligations, thus affecting timelines , leased premises remaining unutilized, cost of execution of contract being affected etc.. Thus, the importance of inclusion of a well drafted force majeure clause has rekindled.

A force majeure clause is an express or implied clause in a contract, governed by Chapter III of the Indian Contract Act , 1872 (“Contract Act” in short) dealing with contingent contracts, more particularly Section 32 . Force Majeure means superior force, or such acts which are beyond the control of the contracting parties which makes it difficult or impossible to carry out obligations under the contract. Black’s Law Dictionary describes it as “an event or effect that can be neither anticipated nor controlled”. Force majeure is a contractual remedy and hence applicable only in the circumstances that an express or implied clause is contained in the contract. The terms and conditions constituting a force majeure clause are decided by the parties prior to the execution the contract.

The clause could be specific in nature laying down the exact events that are covered as force majeure events e.g. war, flood, earthquake, epidemic. In the alternative, the clause could be generic in nature e.g. natural calamities, or could be further loosely worded to state “any event beyond the control of the parties”. The term includes both acts of nature (e.g. earthquake, floods) and acts of people (e.g. wars, riots, strikes).

The essential ingredients of a force majeure clause are:

If such a clause of force majeure is not present in the contract, it is dealt with by a rule of positive law under Section 56 of the Contract Act as frustration of contract which the author has briefly touched in the end.

Since a defaulting party which seeks to benefit from the force majeure clause must essentially prove that the force majeure event goes to the root of the contractual obligation and the failure to perform has been a direct consequence of such an event.

It would not be difficult to imagine that from now on, all thoroughly negotiated force majeure clauses would include “an epidemic or a pandemic” under its wings. However, even if such a clause is present, it will still be important to establish that the affected party was not able to perform its obligations under the contract as a direct consequence of the pandemic (government restrictions, if any) so as to trigger the force majeure clause.

An assessment of the view taken by the Courts during the Covid-19 pandemic would show that that mere commercial distress in performance of a contract will not itself be sufficient to prove that the force majeure event had a direct bearing on the performance of the contract. Both the Hon’ble Delhi High Court and the Hon’ble Bombay High Court refused to grant relief to the defaulting party which sought to invoke the force majeure clause in view of Covid-19 and the lockdown, since they could not prove that the force majeure event has a direct bearing on their non-performance.

In relation to the issue of encashment of bank guarantees, M/s. Halliburton Offshore Services Inc. vs. Vedanta Limited & Anr. 1 , the Hon’ble Delhi Court held that every breach or non-performance cannot be justified or excused merely on the invocation of COVID-19 as a force majeure condition. Although the Delhi High Court held that COVID-19 was a force majeure event but examination of the facts and circumstances of this case, went on to hold that the non- performance by the petitioner could not be attributed to it and that the petitioner had done miniscule work in the months preceding the outbreak of COVID-19.

The Hon’ble Court held that to assess as to whether, genuinely, a party was prevented or is able to justify its non-performance due to the epidemic/pandemic, the Court would have to consider the following aspects:-

The Delhi Court further stated that it is a settled position in law that a force majeure clause is to be interpreted narrowly and not broadly. Parties ought to be compelled to adhere to contractual terms and conditions and excusing non-performance would be only in exceptional situations. The High Court relied on the case of Energy Watchdog vs. Central Electricity Regulatory Commission (2017) 14 SCC 80 and stated that it is not in the domain of Courts to absolve parties from performing their part of the contract. It is also not the duty of Courts to provide a shelter for justifying non-performance. There has to be a ‘real reason’ and a ‘real justification’ which the Court would consider in order to invoke a force majeure clause.

In an absence of a force majeure clause, the difficulty/impossibility in performance of obligations under a contract are statutorily covered under S. 56 of the Indian Contract Act. However, the doctrine is not to be lightly invoked and the ingredients of this doctrine are extremely stringent. The impossibility of performance due to the supervening event is not confined to physical or literal impossibility. The supervening event should be such that strikes at the root of the contract and significantly alters the obligations of the parties from what they had originally bargained for. Mere commercial distress or performance becoming onerous is not sufficient to invoke this doctrine 3 . The relation that the likely period of interruption bears to the outstanding period for performance also plays a key role in deciding the applicability of this doctrine. 4

A strikingly similar case in relation to non-utlization of leased premises due to government restrictions (similar to lockdown) in view of the SARS pandemic was decided in Hongkong. 5 The Court had refused to accept the plea of frustration of contract on considering the relation between the likely period of interruption due to the government restriction and the outstanding period for performance.

In this case due to the outbreak of SARS and a subsequent government Isolation Order, the defendant could not utilize the premises. Within a month of his evacuation, he sent a notice to the plaintiff to terminate the tenancy agreement, inter alia, on the grounds of frustration of contract in view of the Isolation Order. The Court did not accept the argument of frustration of contract on ground that the Isolation Order lasted for only 10 days and was quite insigniﬁcant a period in terms of the entire period of tenancy of two years.

Since it is difficult for defaulting parties to absolve themselves off their contractual obligations during unforeseen events by taking resort to the doctrine of frustration of contract, hence a force majeure clause must be rigorously drafted to include circumstances wherein excuse of performance will be covered and must the language must be tailored to reflect the true intent of the parties.

Disclaimer – While we have taken reasonable care while preparing this newsletter, we accept no responsibility for any error that it may contain, or for any loss or damage, however caused, to any person that relies on it. Readers are specifically advised to seek professional advice before taking any action on the basis of this newsletter. 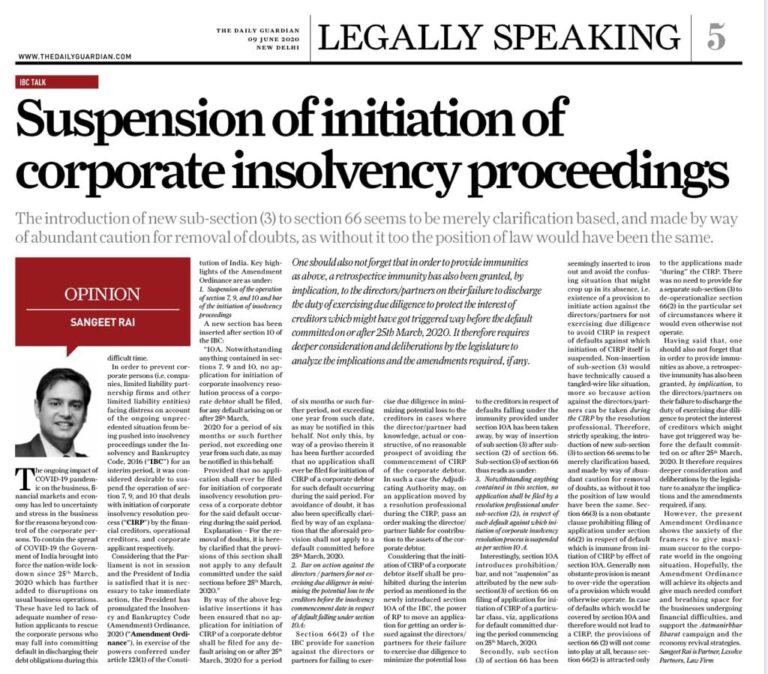